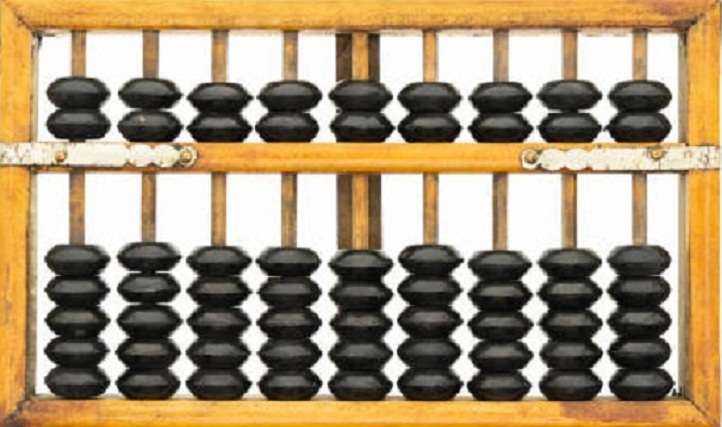 Abacus,  a manual aid consisting of movable beads or disks in a series of sticks in a wooden frame,  is the best way to develop number sense and to build up effectively the child’s math calculating skills,   just by practicing  it for 10to 20 minutes every day during the childhood dais’s.

‘School Abacus’, what we use today, is an invention very old, way back 2700 to 2300 BC during the Mesopotamian period as Sumerian Abacus had undergone different modifications in different period in different parts of the world. Let us learn about it from the beginning and how it reached its current state.

Roman Abacus developed, for moneychangers, businessmen, and engineers,  in which they used to move stones as counters up and down for calculation on a smooth table since the abacus was made in a metal plate where the beads ran inside the grooves. These Romans invented three different types of Abacus namely Dust Abacus, Line Abacus and Grooved Abacus.

Chinese Abacusor  Suanpan, made out of hardwood frame, with more than 7 rods with two beads on each rod in the upper frame and five beads in the in the upper frame with a value of 5 each, and five beads with a value 1  for each in the bottom frame. The wire represent power of Ten, Mention of this Suanpan was made on 190 CE during Eastern Han Dynasty, written by XuYue.

Japanese Soroban Abacus developed in 14th century with beads made of woods with metal or bamboo rods with each column representing a number from 0 to 9.  This Japanese abacus  is being used today also.

Lees Abacus invented in 1950 in Taiwan by Lee Kai  Chen, which incorporated both features of Soroban  and Suanpan is very easy to operate even for the beginners. Since the notation system for each rod representing a definite digit  and each bead  counter, a specific number makes it easy and faster than the  old styled Abacus without leaving any doubt even in the beginners mind.

Russian Abacus differs from Chinese Abacus in positioning the rods.

Rods being  placed  horizontally and the beads are slided from left to right. This Schotyabacus  28cm wide by 46 cm in height , with slight curved rods for preventing back sliding of  the counted beads,  has to be placed on the desk similar to writing in a notebook,  such that right-hand movement coincides with the wires of the abacus.

Rekenrek or arithmetic rack, designed, as a learning tool by Adrian Treffers, a mathematical curriculum researcher at the Freudural Research institute of Holland, with the same functionality as Abacus in doing arithmetical calculations with visual perspective of number relations and mathematical operations.

As it consists of two rows of 10  beads – 5 red beads and 5 white beads, larger version has 10 rows of 10 beads each., helps students to have mental image of numbers and use  5 or 10 as an anchor for counting,  for addition and subtraction.

Binary Abacus: Abacus can be used to explain how numbers are manipulated on a computer using Binary abacus.

This teaches how to convert decimal into binary using a series of beads arranged in Three separate rows in Parallel wires, with each bead representing counter as “On” and “Off”  or “1” and “0”.

Crammer Abacus, developed by Tim Crammer,  supports learners with vision disability, is a modification of the existing Abacus. This abacus beside being useful for basic arithmetic calculation also helps to calculate square roots and cube roots and thus helps more in-depth understanding of numbers than just as calculators.

The Crammer Abacus measuring 6 1/8 by 3 ¼ by 7 /16 inches, has a piece of soft fabric or rubber behind the beads to prevent accidental movements,  having 13 rods but some has 15 rods with one bead above the crossbar and four bead below the crossbar,  has enhanced capabilities if used with Braillewriters for practicing calculations.